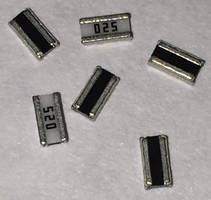 
RALEIGH, NC – Stackpole announces the release of the CSRF0612 current sense chip resistor series. The 1.5W rated device features resistance values from 5 milliohm up to 40 milliohm, 1% tolerances, and TCR as low as 75 ppm. The 0612 size designation denotes that the termination is on the long sides of the part as opposed to the short ends, as with the 1W rated 1206. This longer termination provides higher current handling and lower thermal resistance.

The CSRF is a popular choice for a wide range of portable industrial and consumer electronics, with applications including power conversion, power management, laser controls, bus controllers, audio and video equipment, instrumentation and testing components, and electric and gas powered engine controls.

Pricing for the CSRF0612 is $0.21 each in full package quantities. Contact Stackpole or one of our franchised distributor partners for volume pricing. Five (5) milliohm, 10 milliohm, and 25 milliohm values are in stock.

Stackpole Electronics Inc. is a leading global manufacturer of resistors. Headquartered in Raleigh, N.C., the privately held company began manufacturing in 1928 as part of Stackpole Carbon Company in St. Mary's, Pennsylvania. Now part of the Akahane Stackpole Manufacturing Group, Stackpole has facilities in Japan, Taiwan, China, the US and Mexico.
Share