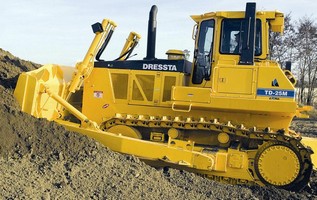 To absorb the higher power and torque at lower engine speeds, Dresssta has revised the torque converter, hydraulic pump drives, and final drives.

Also released with the TD-25M EXTRA series is a gear range preselection system and an automatic downshift function which offers the operator the choice of various automatic operating modes, especially useful in repetitive cyclical operations. A continuously variable speed, hydraulically-driven fan, designed to match the varying heat loads on the dozer is included. On the landfill version, the fan is also hydraulically reversible.