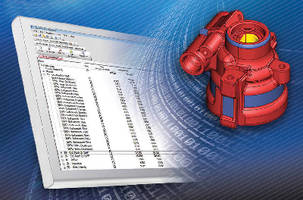 West Springfield, MA U.S.A. – Today, MTI Systems Inc., a leading developer of cost estimating software solutions for manufacturers, announced the release of Costimator® With 3DFX, an automated feature recognition (AFR) function that recognizes CAD features and their parameters from solid models. 3DFX provides estimators complete control over features they “extract” and import into Costimator for estimating. Costimator With 3DFX increases cost estimating speed and quoting throughput up to 90%, while dramatically improving cost estimating accuracy and consistency, from part to part, estimator to estimator. To view a demonstration video of the new Costimator With 3DFX, visit http://www.mtisystems.com/3DFX/video.html

3DFX is a fully integrated add-on for Costimator. CAD features and the parameters that are selected and sent to Costimator are automatically estimated via industry-validated cost models. It also offers a unique easy-to-use model editor for user-customizable templates, enabling estimators the ability to develop their own defined parameters. Any unrecognizable features and their associated dimensions can be quickly identified and entered during the process. “Costimator with 3DFX is user friendly, even for inexperienced estimators,” commented LaJoie.

For more information  or to view a video or schedule a demonstration on Costimator with 3DFX, visit http://www.mtisystems.com/3DFX/index.html

MTI Systems began development of cost estimating software solutions in 1982. Originally designed for suppliers, it reduces estimating time, while not compromising accuracy or consistency for manufacturers who do machining, fabrication, and mechanical assembly. The cost estimating software system calculates cycle times and the cost of manufacturing a part or assembly based on the capabilities of the suppliers’ equipment and their shop rates. Costimator helps estimators meet the needs of new technology suppliers and OEMs in industries such as aerospace, agriculture, defense, electronics, medical, heavy truck, energy, oil and gas, and transportation.