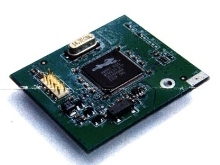 RCM3100 RabbitCore microprocessor core module mounts directly on user-designed motherboard and can interface with all CMOS-compatible digital devices. Powered by Rabbit 3000(TM) microprocessor, RCM3100 has 6 serial ports and operates at 29.4 MHz and 3.3 V. It is equipped with up to 512K each of Flash and SRAM, quadrature encoder inputs, PWM outputs, and pulse capture and measurement capabilities.

Davis, Calif., June 13, 2002 - The new RCM3100 RabbitCore microprocessor core module is the ideal solution for designers who want to rapidly develop and implement embedded systems. Priced at only $27 (qty. 1000), the compact RCM3100 boasts powerful features and a small footprint-1.85" x 1.65" (47 x 42 mm)-to simplify integration. RabbitCores mount directly on a user-designed motherboard and act as the controlling microprocessor for the user's system. RabbitCores can interface with all manner of CMOS-compatible digital devices through the user's motherboard.

Powered by the new Rabbit 3000(TM) microprocessor, the RCM3100 has 6 serial ports and operates at 29.4 MHz and 3.3 V (with 5 V-tolerant I/O). Built-in low-EMI features, including a clock spectrum spreader, help designers eliminate the kind of emissions-related problems that frequently derail tight development schedules.

Available in two models, the RCM3100 is equipped with up to 512K each of Flash and SRAM, quadrature encoder inputs, PWM outputs, and pulse capture and measurement capabilities. Two 34-pin connection headers provide 54 digital I/O shared with the 6 serial ports and alternate I/O features. (The RCM3100 is pin compatible with the Ethernet RCM3000, facilitating cost-effective implementation of both Ethernet and non-Ethernet systems.)

Programs are developed with the industry-proven Dynamic C® development system, a C-language environment that includes an editor, compiler, and in-circuit debugger. Efficient hardware/software integration facilitates rapid design and development. User programs can be compiled, executed, and debugged using Dynamic C and a programming cable--no in-circuit emulator is required. An extensive library of drivers and sample programs is provided.

RCM3100 models are available July 2 and are priced from $27 (qty. 1000). A complete Development Kit is priced at only $239 and includes RabbitCore module (RCM3110 with 256K Flash/128K SRAM), prototyping board, AC adapter (U.S. only), serial cable for programming and debugging, Getting Started manual, and
complete Dynamic C SE software development system (not a trial version) and documentation on CD-ROM.