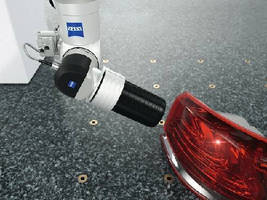 With ZEISS DotScan Chromatic White Light Sensors mounted on articulating RDS measurement head, ZEISS ACCURA multi-sensor CMMs can scan complex parts from all sides in one measuring run. Systems can perform dimensional measurement of freeform surfaces on sensitive, soft, or low-contrast materials. Available in measuring ranges of 10, 3, and 1 mm with max measuring angle of Â±30Â°, sensors can be automatically exchanged with other ZEISS contact or optical sensors during CNC run.


MAPLE GROVE, Minn.,-- ZEISS announces a new solution for dimensional measurement of freeform surfaces on sensitive, soft or low-contrast materials. The new ZEISS DotScan family of chromatic white light sensors is now available on new ZEISS ACCURA multisensor coordinate measurement machines. For the very first time, customers can scan complex parts from all sides in one measuring run – thanks to the combination of the ACCURA with articulating RDS measurement head and the new DotScan sensor. ZEISS will introduce the first three members of the DotScan sensor family at the IMTS (International Manufacturing Technology Show) in Chicago, September 12-17, 2016.

Transparent or highly reflective surfaces are no problem for the ZEISS DotScan. When mounted on the RDS articulating probe head, the ZEISS DotScan sensor can reach all areas of the part without difficulty.

Not only does the ZEISS DotScan family save customers time in measurement, it also enables them to measure highly reflective freeform surfaces. Previously, a certain measuring range of the sensor was exceeded because the workpieces had to be rotated manually. The new sensor family is now available on the ZEISS ACCURA multisensor coordinate measuring machine (CMM) which enables the fully-automatic exchange of the ZEISS DotScan during a CNC run.

ZEISS DotScan is an outstanding option for measuring freeform surfaces and minute structures. The embedded chromatic white light sensor is the method of choice, especially when traditional styli or camera sensors reach their limits on sensitive, soft, reflective or low-contrast surfaces. By using ZEISS DotScan, strongly reflective surfaces, such as metal components in knee implants, can be measured without the need for a contrast medium. Now, transparent lacquered surfaces can be distinguished from other underlying metallic layers.

Flexibility in range and angle

ZEISS DotScan is available in three different measuring ranges: 10, 3 and 1 mm. Each sensor can be fully automatically exchanged with other ZEISS contact or optical sensors inside a single CNC run. With 20,736 possible orientations, the articulating RDS measurement head can align the ZEISS DotScan perpendicular to surfaces of the part being measured. And since the maximum measuring angle of the ZEISS DotScan is plus/minus 30 degrees, critical dimensions on strongly curved components can now be measured.