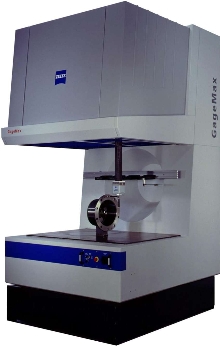 MAPLE GROVE, Sep 8 - Carl Zeiss Industrial Measuring Technology today introduced at IMTS '04 (Booth # D-4501) GageMax, the latest coordinate measuring machine (CMM) of its "MaxLine". GageMax, a more compact version of the CenterMax introduced in 2001, was developed in cooperation with customers from different industries. The result is a machine that offers reduced life cycle costs, increased productivity, and meets the harsh conditions of a typical production environment.

GageMax offers a small footprint for easy integration into the production line. The key to providing metrology room precision in a manufacturing environment is the unique 3D box. It houses the complete measuring technology. New guideway and drive systems allow the machine to be used even in very rough ambient conditions.

Until now, air bearings were generally used for highly accurate coordinate measuring machines. GageMax features linear guideways specifically designed for high-precision measuring technology. This guideway technology permits ambient temperatures of more than 35° C and eliminates the need for purified air. No additional costs are incurred for enclosures, air-conditioning or clean-room conditions, because all critical components are housed in the compact, protected 3D box.

GageMax can be used like an open metrology room. As a result, time is saved by reducing part transport and allowing parts to adapt to the temperature of the metrology room. Measured data is available immediately.

Components tend to be re-developed or changed in ever shorter cycles. Just by changing the measuring program, GageMax is ready for new workpieces without any lengthy downtimes. Conventional doghouse gages on the other hand incur high costs for downtimes and rebuilding.

GageMax is available with the VAST XT probe and the Windows-based Calypso CAD software.

The Carl Zeiss Group offers products and services for the three strategic growth areas of biosciences and health care, consumer goods and systems solutions for industrial markets. The group is structured as six business units that operate with sole responsibility and are generally ranked first or second in their markets. The company is represented in more than 30 countries and operates production facilities in Europe, North America, Mexico and Asia. In fiscal year 2002/2003 the global workforce of approximately 14,150 employees generated revenue of 2.029 billion euros. Further information is available at www.zeiss.com.
Share