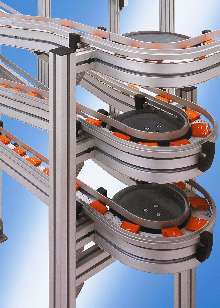 VarioFlow(TM) single strand chain conveyor lets manufacturers link assembly operations with functions such as parts feeding and packaging on either side of assembly process. Profile widths include 65 and 90 mm, with chains of 62 and 87 mm, respectively. Chain handles tensile force up to 1250 N. Applications include automotive, electronics, packaging, and personal care industries.

Company will display VarioFlow(TM) at the IMTS 2002 Manufacturing Conference, September 4-11, 2002 at McCormick Place in Chicago, Booth #4222

The new conveyor, named VarioFlow(TM), is a significant enhancement to the existing family of conveyors from Bosch Rexroth because it lets manufacturers link assembly operations with functions such as parts feeding and packaging on either side of the assembly process.

The initial offering from Bosch Rexroth consists of two profile widths, 65 mm and 90 mm, with chains of 62 mm and 87 mm respectively. VarioFlow offers faster transport speeds (up to 50 m/min) and stronger chain than other single strand chain conveyors (tensile force of up to 1250 N). It's also more economical than many other chain conveyor systems, and brings new flexibility to the automotive, electronics, packaging and personal care industries.

Bosch Rexroth Corporation, a merger of Bosch Automation Technology and Rexroth, is a wholly owned subsidiary of Robert Bosch GmbH. In the year 2001 the separate companies had total revenues of approximately $3.42 billion (3.86 billion Euros) and a worldwide total of around 26,000 employees. Divisions include Industrial Hydraulics, Electric Drives and Controls, Linear Motion and Assembly Technologies, Pneumatics, Service Automation and Mobile Hydraulics. Bosch Rexroth - The Drive & Control
Company - offers comprehensive solutions for drives and motion control in 80 countries around the world.