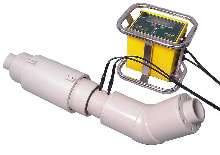 PowerGuard(TM) double containment system, molded from polypropylene or PVDF resin and joined with PowerCore(TM) electrofusion technology, permits joints in carrier pipe to be inspected prior to closing containment pipe. Pipe sizes from Â½-18 in. may be specified. Flo-True(TM) anchors hold elbows and wyes in place to prevent expansion and contraction. Applications include pharmaceutical and semi-conductor manufacturing, pump discharge lines, and chemical-transfer lines.

Molded from either polypropylene or PVDF resin, PowerGuard(TM) systems are joined with Flo-Safe's proprietary electrofusion technlology, PowerCore(TM). The system permits joints in the carrier pipe to be inspected and tested prior to closing the
containment pipe. Power Guard(TM) systems are designed for pressure or drainage applications. In either type of system, the carrier pipe may be of a different resin than the containment pipe. Pipe sized from ½" through 18" may be specified.