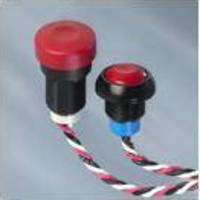 The IH Switch version (OFF-MOM) is designed to withstand a high number of cycles and repetitive jogging. For applications where positioning the load is critical, including material handling, loaders, lifts, trucks, buckets and shovels and other applications requiring continuous operations.

The dome shaped actuator, available in eight colours, features a spring return and provides tactile feedback that the switch has been activated. Separating the sealing membrane, the spring and the tactile feedback elements inside the switch optimizes mechanical life by greatly reducing wear and tear.

The IH Linear version, with proportional output, is ideal for control valves or variable speed drives. Suitable applications include industrial controls, heavy duty equipment and other handling applications where operators need to control motion and speed. It can function as an additional axis for handgrip/joystick operations.

It is designed to react to the pressure exerted on the switch. Response is proportional to actuator travel. Hall Effect technology ensures no-contact, low wear and tear for reliable, long life.