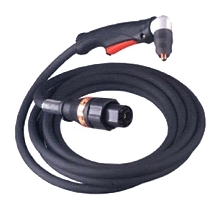 SureLok(R) torch, with ATC(TM) Advanced Technology Connector, designed with sequential interface connections, allows end users to adapt cutting torches to almost any manufacturer's air-plasma cutting system. Torches with connector are available with outputs up to 100 amps. Connector is less than 2 in. in diameter.

The Thermal Dynamics SureLok torch with patent-pending ATC torch connector makes it easy to either connect or disconnect the torch with less than one thread-turn to assemble. For added safety and a sure connection every time, the ATC connector is designed with sequential interface connections.

"End users have often commented that they would like to have the ability to quickly change out a torch but couldn't do so because typically the torch is hard fastened to the system," says Mike Linehan, Thermal Dynamics marketing manager. "The ATC gives them the option of using the favored SureLok torch, regardless of the major plasma system they're using on a job. In the field, this means better performance and increased efficiency. For instance, the end user can use a small torch for precision cutting and a larger torch for heavy-duty cutting. They can also literally
carry their torches machine-to-machine and always know they'll be compatible."