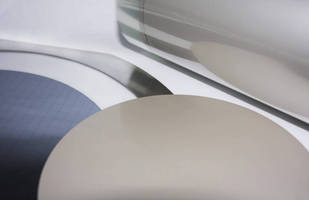 "The development of Ablestik C100 die attach films is a huge leap forward for the leadframe package sector," explains Kevin Becker, Henkel Director of Product Development for Film Die Attach Adhesives. "Film simply provides incomparable process control and reliability- and now those advantages are no longer limited to non-conductive processes, but are available for applications that require conductive materials as well."

Ablestik C100 series film die attach materials also provide a high degree of manufacturing latitude, as their workability has been established on die sizes ranging from 1mm x 1mm up to 6mm x 6mm for a variety of package types including both QFNs and QFPs. In addition, the materials' better wetting ability with lower bonding temperature provides extremely stable adhesion strength, allowing robust adhesion against moisture and MSL Level 2 performance on all leadframe surface finishes.

"As wafers continue to get thinner, leadframe packaging specialists will require die attach film alternatives to provide processing support and stability," concludes Becker. "Ablestik C100 materials deliver this essential process control element in combination with a bevy of other advantages. These conductive films are truly game-changing."

Except as otherwise noted, all marks used herewith are trademarks and/or registered trademarks of Henkel and/or its affiliates in the US and elsewhere.

Henkel operates worldwide with leading brands and technologies in three business areas: Laundry & Home Care, Cosmetics/Toiletries, and Adhesive Technologies. Founded in 1876, Henkel holds globally leading market positions both in the consumer and industrial businesses with well-known brands such as Persil, Schwarzkopf and Loctite. Henkel employs about 48,000 people and reported sales of $20.07 billion and adjusted operating profit of $2.27 billion in fiscal 2010. Henkel's preferred shares are listed in the German stock index DAX and the company ranks among the Fortune Global 500.