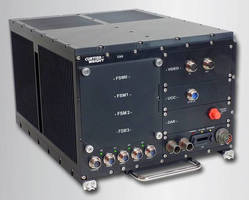 ASHBURN, Va. – Curtiss-Wright Corporation (NYSE: CW) today announced that its Defense Solutions division has introduced a new high-speed data capture card for use with its family of rugged COTS data recorder solutions. The new Universal Capture Card (UCC) is Curtiss-Wright’s first conduction-cooled capture XMC (VITA 42) card designed for use with rackmounted storage solutions such as the Multi-Channel Synchronized Recorder (VR-MCSR), and rugged deployable solutions such as the Compact Network Storage 4-slot (CNS4) data recorder. Ideal for use with rugged deployed aerospace and defense applications, the UCC module captures sFPDP, GbE and 10GbE data. To ensure highly accurate data recording and playback, the card performs time stamping and channel synchronization.  The UCC speeds and simplifies the integration of high-speed multi-channel data recording into rugged deployed applications to capture and record sensor data in airborne and ground vehicles such as UAVs and other ISR platforms.

The new rugged UCC card is optimized for use with Curtiss-Wright’s family of COTS data recorders, such as the Company’s MCSR and CNS4 products. Curtiss-Wright comprehensive range of rugged data recorders includes video recorders, board level recorders, rackmount recorders, and custom recorders. These subsystem solutions include COTS and turnkey COTS subsystems in configurations that meet all requirements from laboratory development to rugged deployed environments.

CNS4: The Compact Network Storage 4-slot (CNS4) is a conduction-cooled, high-performance data recorder with scalable storage and encryption options. The CNS4 incorporates the UCC card to capture high-speed data. The CNS4 is a modular design consisting of a full ATR Chassis and up to four (4) Flash Storage Modules (FSM-C). The FSM-C modules plug into the CNS4 backplane and are housed behind an easy-to-open access door. The FSM-C modules are easily removed from the CNS4 chassis with tool-less wedge-locks. This rugged file server is designed for use in a broad range of both manned and unmanned ground, air, and sea vehicles.

NOTE: All trademarks are property of their respective owners.