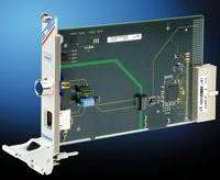 Fountain Valley, CA, April 26, 2005 - The CLAN7 is a ruggedized 3 U CompactPCI module that combines industrial standards with a low price. Based on the LAN Controller 82551ER specifically developed by Intel for the embedded sector, this module provides an Ethernet/Fast Ethernet interface according to IEEE 802.3. In addition to the 8-pin RJ45 socket, the front panel provides a 4-pin M12 socket according to the Industrial Ethernet Standard of the IAONA organization, the industry-independent institution for industrial Ethernet. The CLAN7 is perfect for harsh environments, such as railway applications, due to the M12 socket that provides a ruggedized connection. The module can also be equipped with a rear I/O J2 connector. The configuration is easily changed by four jumpers.

The CLAN7 allows data rates up to 100 MBit/s. Four LEDs in the front panel give information about the operating state of the 4 HP module as well as the quality of the LAN connection. The network is electrically separated from the system bus with an insulation resistance of 500 V DC. The CLAN7 is designed for operation in an ambient temperature range of -25° to +70° Celsius.

Whether you need a powerful link to the back office of your production line or you want to network various terminals of a train information service: CLAN7 offers a stable Ethernet connection for any industrial-grade application.