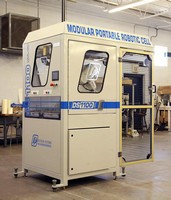 Weighing less than ton, Model DS1100-TD can be moved from one point of use to another with pallet jack. It can load in less than 2 sec and cycle in less than 10 sec, and transfer parts to secondary operations such as washing, inspection, or marking. Featuring 2 drawers, 7-axis robot can handle tray of up to 18 x 24 in. Clean room compatibility makes it suitable for assembly, medical, electronics, and semi-conductor manufacturing.


Distech Systems has introduced a compact tray loader that is capable of loading and unloading both trays and conveyors. Weighing less than a ton, the DS1100- TD can be moved from one "point of use" to another with just a pallet jack. All controls and guarding reside within the portable module. Best of all, the new system costs less than $75,000.

Assembly, medical, electronics and semi-conductor manufacturers will appreciate the DS1100-TD's speed, and the clean room capability. The seven axis robot can load in less than two seconds and cycle in less than 10 seconds. The robot can also transfer parts to secondary operations such as washing, inspection or marking.

Two drawers will accommodate a tray of up to 18" by 24". Trays can be wire, injection molded, vacuum formed or custom machined. The system is also designed to accept parts from a pallet "power & free" or SEMA interface.