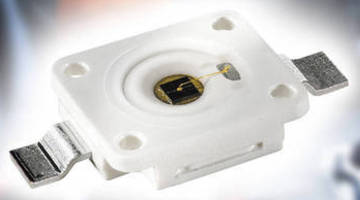 Built on 1 mmÂ² ThinFilm chip with 2 stacked p-n junctions, IR Platinum Stack DRAGON can generate optical output of nearly 1 W from driving current of 1 A for space-limited automotive/industrial/consumer applications. Viewing angle and radiant intensity can be varied with standard secondary optics, and forward voltage is 2.9 V at 1 A. With wavelength of 850 nm, IR LED offers compromise between max spectral sensitivity for CCD and CMOS cameras and suppressed visibility for human eye.

The new infrared Platinum Stack DRAGON from OSRAM Opto Semiconductors provides high optical output from a small surface area, creating an ideal high-radiance solution for automotive, industrial and consumer applications where space is limited. Its 1 mm² ThinFilm chip-in-stack technology enables it to generate an optical output of nearly 1 W from a driving current of 1 A - almost twice the output of the standard chips that have been used up to now.

The viewing angle and radiant intensity can be varied with standard secondary optics. Preferred applications are those that require high radiance so that small optics can be used. Night vision systems, sensor-based electronic pedestrian protection systems and pre-crash sensors in vehicles can be made much more compact because fewer IR LEDs are needed to provide the same optical output. In industrial applications, these high-power IR LEDs can be used in illumination units for CCTV cameras or in systems for automatic number plate recognition (ANPR).

The increased output of the new infrared Platinum Stack DRAGON is based on a special ThinFilm chip. It has not one, but two p-n junctions that have been grown or "stacked" one on top of the other. This stack technology achieves almost twice the optical output power compared to conventional IR ThinFilm chips. "We were able to bring the infrared Platinum Stack DRAGON to market quickly thanks to our experience in developing the stack technology for our lasers," said Harry Feltges, Marketing Manager for Infrared Components at OSRAM Opto Semiconductors. "Its package is the same as the one used for the other IR DRAGON components, so existing designs can be used without modification." The forward voltage of 2.9 V at 1A enables standard LED drivers that operate in this voltage range to be used. The IR LED emits at a wavelength of 850 nm and is a perfect compromise between maximum spectral sensitivity for CCD and CMOS cameras and suppressed visibility for the human eye.

Another possible application for the infrared Platinum Stack DRAGON is 3-D camera technology, which will be used more and more in consumer devices such as gaming consoles and TVs for gesture recognition. The high modulation frequencies of the light source (typically 20 to 50 MHz) required for these applications can be easily achieved with the new Stack DRAGON.