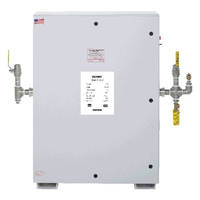 
Tankless Inc. of Sarasota Florida is pleased to announce December 31, 2014 the release for production of their new CF series of water heaters and a product line expansion.

These CF units are replacing the now retired C series of units that were first introduced in 2000. Many Fortune 500 companies are using the C series effectively in many types of applications.

The CF series units include the following improvements.

1. One master contactor controls the switching on and off of the system versus individual contactors as was the case with the C series.

This change will increase the mean time to failure as the contactor will switch on and stay on when the pressure switch is energized.

This will reduce the number of times the contactor turns on and off during operation which will in turn increase the contactor's longevity.

2. An optional flow switch requires water demand before the unit starts. In some applications

this will save energy and is an added safety to possible over heating and equipment failure.

3. Individual fusing for all elements protects against a breaker tripping due to a water supply failure and subsequent element short. Theoretically, the flow switch mentioned in two above will help guard against damage during a water supply failure. This increased safety will also add to the units longevity.

The Tankless Inc. product line list also broadened in range with the offering of two new unit sizes. The new CF 120 KW and CF 144 KW units are now offered in 480 V delta configurations and are extremely cost effective products at less that $10,000 for 500,000 BTUs of heating capacity per hour. NEMA 4 enclosures are standard with these larger units.

Options such as electronic temperature controls and mixing valves allow their use on the largest of applications.

These product improvements along with the addition to the line make this line of water heaters the best value in the market place according to the company.

Their products can be found at www.hotwaterheater.com or by contacting the company at 800 826 5537.
Share