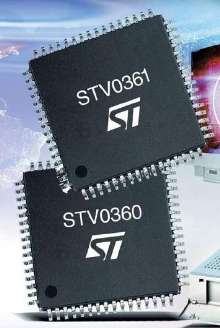 The new chip is designed for digital and hybrid TV sets, terrestrial set-top boxes (STBs) and digital video recorders. It connects seamlessly to ST's industry-standard OMEGA back-end devices to create highly cost-effective chipsets for this price-sensitive market. It is hardware and software compatible with the existing and widely-used STV0360 and no engineering effort is required to take advantage of its improved specification. The echo protection capability of the STV0360 - which required control from the host set-top box (STB) - has been completely automated in the STV0361.

NorDig is a cooperative organization of Nordic television and telecom companies which seeks to formulate a common strategy for the introduction of digital TV in the Nordic countries (Denmark, Finland, Iceland, Norway, and Sweden), in an open and standardized market. The NorDig Unified specification version 1.0.1, which is now seen as an appropriate standard for the whole of Europe, combines the older NorDig I and NorDig II specifications. The STV0361 meets and exceeds the demodulation requirements of NorDig Unified v1.0.1.

Compared to satellite and cable networks, terrestrial services face additional front-end challenges. Terrestrial demodulators have to cope with 'dirty' signals due to multipath echoes from surrounding buildings and moving objects, and with similar effects in single-frequency transmitter networks. In addition, man-made radio-frequency interference from electric motors, car ignition systems, and light switches, and noise from external sources such as lightning strikes, can cause picture defects or blackouts.

The STV0361 can manage signals containing such echoes by synchronizing up to 260 microseconds outside the guard interval. Doppler shifted signals, seen in mobile applications or where an echo is received from a moving object, are detected and processed in accordance with NorDig requirements, using adaptive channel correction in both time and frequency.