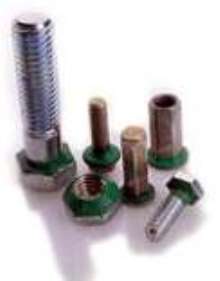 Manufacturers can eliminate the time-consuming in-house application of O-rings, gasket seals or sealant compounds and create a gasket-like seal at pressures up to 500 psi with the NYSEAL® pre-applied self-sealing element from Nylok Corporation.

The green colored coating is permanently fused on the bearing surface of the fastener. As the screw is seated to its final position against the mating part, NYSEAL compresses slightly and fills the void under the bearing surface of the head and countersink or bore. It will not work loose, is highly durable, prevents galvanic corrosion between dissimilar materials and is particularly effective in sealing applications involving hydraulic fluids, oil, gasoline, most petroleum fluids, water and gaseous vapors. The sealant covers 360° of the bearing surface of the fastener's head and two-to-three thread pitches down the shank, and requires no additional curing or heating after installation. Fasteners treated with NYSEAL are reusable and the self-sealing element will not shrink or dry out from age.

A member of The Marmon Group of companies, Nylok Corporation is the world leader in value-added fastener parts and holds more patents for innovative fastener technology than any other company. The NYSEAL coating was developed to answer a customer's need for a highly durable fastener sealing element that could perform under high pressure and be resistant to a wide variety of chemicals - and it is befitting Nylok's reputation throughout the world for "inNYvation®" in developing new products that solve challenges.