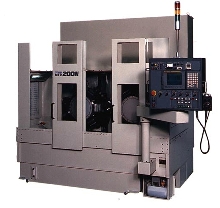 MT2-200W Twin Spindle CNC Lathe features No Idle Time Function: when turret on first operation is completed, it will support second operation being done on second spindle. Both turrets have 12 tool capacity. Spindles are driven by 2 independent 35 hp AC drive motors and operate at 4,500 rpm. Maximum turning length and diameter are 4.72 and 7.87 in., respectively. Turning system includes part stacker and part loading system.

The 4,500 rpm spindles are driven by two independent AC drive motors. 35HP motor on each spindle.