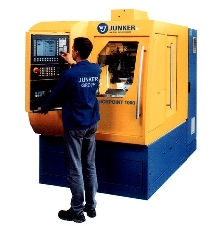 Via precise and simultaneous control of X and Z axes, Quickpoint 1000 is capable of machining cylindrical parts that may be tapered or contoured, or have crowned surfaces, shoulders and slots, in single chucking. With CBN or diamond wheels, speeds up to 28,000 sfm are possible. Grinder features working range of 75mm dia and grinding length of 150mm.

Via precise and simultaneous control of the X and Z-axes, Quickpoint allows manufacturers to machine cylindrical parts that may be tapered, contoured, perhaps have crowned surfaces, shoulders and slots or even grind a thread in a single chucking. An example would be automotive drive train parts. Quickpoint is suited for long to medium runs and families of parts where traditional grinding methods would require long wheel dressing cycles or part transfer from machine to machine. Quickpoint high speed grinding with CBN or diamond grinding wheels significantly reduces wheel dressing.

Because of Junker's patented tilting wheelhead assembly, the actual contact area between grinding wheel and work piece is minimized, which results in reduced cutting forces. Lower cutting forces mean there is less heat generated, allowing the machine to run at higher cutting speeds without work piece damage. With CBN or diamond wheels, speeds of up to 28,000 sfm are possible, using Junker's "Jukomet" cartridge type grinding
spindles.

Further, coolant application is simplified. Due to the tilt angle the fluid only needs to saturate the small intersection between the wheel and the part.

Work piece drivers or special chucks are not necessary with the Quickpoint technology. For driving the part, the friction generated when clamping the part between centers, is sufficient. Grinding a part from end to end in just one chucking is therefore
possible. This also results in drastically reduced cost for clamping tools in particular when part loading must be automated.

Junker offers several Quickpoint models, stepped in size and configured with various options. Standard swing diameters range up to 280mm (11 in.) and grinding lengths up to 1000mm (40 in.). Certain models may be equipped with up to four grinding wheels on a CNC-controlled B-axis turret. The newly designed Quickpoint 1000, exhibited at the EMO show for the first time, is at the small end of the spectrum with a working range of 75mm dia. (3 in.) and a grinding length of 150mm (6 in.).