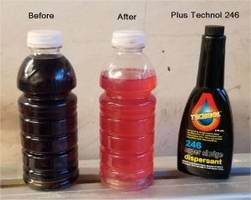 Dieselcraft/Technol246 penetrates and dissolves bio-filmÂ (sludge/algae) – agglomeration of microorganisms in which cells adhere to each other on tank surface or at fuel water interface –Â in diesel fuel. Product comes in 12-count cases ofÂ 8 oz bottles, each of which treats 275 gal, as well as 5 gal pails; each gallon treats 4,000 gal of fuel.

Have you been using a biocide religiously and it’s just not working? Here is why. A bio-film has formed that is an agglomeration of microorganisms in which cells adhere to each other on the tank surface or at the fuel water interface. These adherent cells are surrounded by shield of extracellular polymeric substance (EPS). EPS constitutes 50% to 90% of a bio-film's total organic matter. This bio-film also known as sludge and also known as what a lot of people refer to as algae protects the bacteria from the biocides.

Conventional fuel additives offer modest performance enhancements however, do not address bio-films contamination problems in diesel fuel and have little to no impact on the prevention of sludge formation in diesel fuel.

Preventing water in the fuel presence to begin with should be paramount. But once the bio-film is present it must be dealt with.

Two simple rules to live by:

Do nothing and continue to make more bad fuel.

Dieselcraft/Technol246 is available in cases of 12 each 8 oz bottles. Each 8 oz bottle treats 275 gallons or 5 gallon pails. Each gallon treats 4,000 gallons of fuel. 246 will penetrate and dissolve the bio-film rapidly and solve the problem.

When you begin to plug fuel filters and see the stringy black mess then you had better take action.