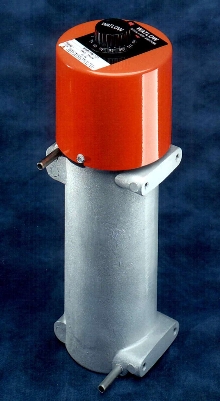 The CAST-X SERIES 1000's aluminum cast construction provides optimum temperature control through its ability to maintain heat accurately and consistently. It also helps to prolong the life of the heater by efficiently conducting heat away from the tubular elements.

The CAST-X SERIES 1000 uses a helically coiled tube to eliminate direct contact between fluids and tubular elements of the heater, which eliminates hot spots caused by poor flow conditions. The unit is also designed to safely run dry with the thermostat, reducing the risk of heater failure and fluid leaks.

The new line is suited to numerous applications, is easy to install and can be customized to meet specific customer needs.

Since the company's founding in 1922, Watlow has brought its thermal expertise to numerous applications, including semiconductor, plastics processing, foodservice equipment, life sciences, power generation, aerospace and others. Headquartered in St. Louis, Missouri, Watlow is the largest custom designer and manufacturer of industrial heaters, sensors, controllers and software with offices and manufacturing facilities around
the world.

For additional information or the name of the nearest Watlow representative: