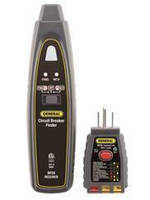 Comprising a transmitter and receiver, General’s BF20 allows users to accurately perform the following tasks in a fraction of the time of other methods:


The BF20’s fully automatic operation turns two-man jobs into one-man jobs. When the transmitter is plugged into any 110V outlet, it sends a signal to the circuit breaker panel. At the panel, the receiver tip can be used to “scan” all of the breakers, or fuses, to identify the associated breaker.

The tip of the receiver houses an NCV detector. A beeper sounds and an LED flashes to signal “hot” or energized outlets, lines and cables. What’s more, a patented circuit in the BF20 eliminates the false positives that weaker technologies like inductive coupling often produce. The receiver also is equipped with a built-in white LED work light to help in dark locations.

The plug-in transmitter doubles as an outlet wiring tester. By measuring leakage currents, it can identify five common wiring faults in GFCI and conventional outlets: open ground, open neutral, open hot wire, hot wire and ground reversed, and hot wire and neutral reversed. The type of fault is indicated by a unique pattern of colored LEDs. The transmitter also can verify that a GFCI outlet is correctly wired.

Designed to comply with safety standard IEC 61010-1, the BF20 has a three-year limited warranty.

Headquartered in New York City since 1922, General Tools & Instruments remains the market leader in precision specialty hand tools. Recent product advancements and corporate acquisitions have expanded General’s line to include over 1,500 precision tools and hand-held instruments. This vast array of products is widely used by contractors, professionals, technicians, DIYers and hobbyists in a broad range of industries. To learn more about General Tools & Instruments and its products, visit www.generaltools.com or call Customer Support at 1-800-697-8665.