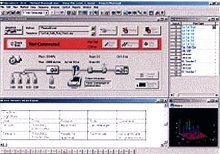 Pleasanton, CA (August 9, 2002) - Scientific Software, Inc., a world leader in providing software solutions to the scientific community, announced that it has released version 3.0 its EZChrom
Elite(TM) Chromatography Data System. Built on the solid platform that recently won Scientific Computing and Instrumentation's 2002 Readers' Choice Award, this version, which was focused on the needs of pharmaceutical customers, brings even more value to the life sciences market. Greater convenience in achieving US FDA's Part 11 compliance and reduced 'time-to-validation' are possible with electronic signature enhancements, expanded activity logs, and Citrix® Metaframe XP(TM) support for thin client access.

"We are extremely pleased to bring additional compliance tools, technology innovations and control options to the life sciences market," says Soheil Saadat, President and CEO of Scientific
Software, Inc., "We feel that v3.0 of EZChrom Elite continues our tradition of offering the greatest value available in an enterprise CDS."

Numerous other feature enhancements are included in this version, based on continuous interaction with users, such as enhanced accessibility of photodiode array (PDA) data via the
updated Elite ToolBox(TM) technology and optional comments for e-signatures.

Scientific Software, Inc. is a world leader in the development, sale and support of software systems to the scientific community. With over 50,000 worldwide installations, the Company's award-winning EZChrom Elite(TM) chromatography
data system is used in a wide range of markets such as pharmaceutical, environmental, chemical, and food analysis. The Company's CyberLAB Knowledge Engineering System(TM) is used by leading pharmaceutical and biotechnology companies providing an enterprise-wide solution for information collaboration, data management, regulatory compliance and knowledge engineering. Scientific Software, Inc. is based in Pleasanton, California.

Further information about Scientific Software, Inc. and its products is available at scisw.com or at 1-800-588-8878.