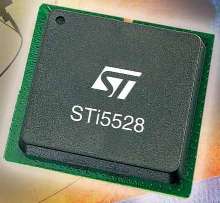 Geneva, January 7, 2004 - STMicroelectronics (NYSE: STM), the world's number one supplier of set-top box (STB)* chips and the industry's long-term leader in MPEG-2 decoders, has introduced the STi5528 and STi4629 chipset to its OMEGA family of STB decoders. Supporting full dual TV and dual PVR (Personal Video Recorder) functionality, the new solution extends the performance of the OMEGA family through the use of two 32-bit RISC processors, making it a highly cost-effective solution for advanced digital set-top boxes

The STi5528 and STi4629 chipset can decode two separate video and audio streams allowing consumers to connect two televisions to a single set top box. Furthermore, while decoding the two audio and video streams, the new chipset can also record two channels to a hard disk, so providing dual PVR functionality. Together, these two features allow manufacturers to build products that eliminate the need for a second STB to provide digital content to the second TV that is present in many homes.

For the management of real time functions such as audio and video decoding and demultiplexing, the STi5528 employs an ST20 core running at 166MHz. The ST20 is the most widely deployed processor in equipment such as STBs and DVD players that require MPEG-2 decoding and has been proven in tens of millions of STBs since the OMEGA family was introduced in 1997.

"With the introduction of the STi5528 and STi4629 chipset, we have extended the performance of the OMEGA family to a new level, combining the power of the ST40 with the proven performance of the ST20 to allow unprecedented flexibility at a competitive price/performance point," said Christos Lagomichos, vice president and general manager of ST's Set-Top Box Division.

Both the STi5528 and the STi4629 may be used in satellite, cable or terrestrial set top boxes. Used on its own, the STi5528 can decode two video streams, enabling picture in picture functionality on a single TV.

STMicroelectronics is a global leader in developing and delivering semiconductor solutions across the spectrum of microelectronics applications. An unrivalled combination of silicon and system expertise, manufacturing strength, Intellectual Property (IP) portfolio and strategic partners positions the Company at the forefront of System-on-Chip (SoC) technology and its products play a key role in enabling today's convergence markets. The Company's shares are traded on the New York Stock Exchange, on Euronext Paris and on the Milan Stock Exchange. In 2002, the Company's net revenues were $6.32 billion and net earnings were $429.4 million. Further information on ST can be found at www.st.com.

o TruSurround is a trademark of SRS Labs, Inc.

o Dolby is a registered trademark of Dolby Laboratories.

The STi5528 and STi4629 combine all the features required for dual TV and dual PVR set top boxes into a single chip set: