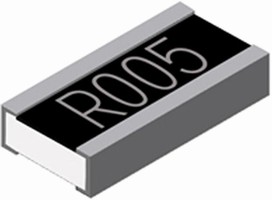 RALEIGH, NC (Mar. 5, 2008) - Stackpole Electronics, Inc. announces the expansion of the resistance value range for the CSR 3 down to .003 ohms. The CSR 3 is a 1225 chip size thick film resistor technology with reverse geometry as compared to other chips of similar size, meaning the terminations are along the long dimension instead of the short dimension. This geometry provides lower resistance values and greater current handling than standard 2512 size thick film current sense resistors.

The wider terminations also help dissipate the additional heat generated by the higher current and wattage. Finally, with the thick film technology of the CSR 3 comes all of the usual advantages of a thick film resistor, such as relatively low cost, low inductance, humidity and moisture withstanding, and fusibility. The CSR 3 is now capable of resistance values from .003 up to .2 ohms and tolerances of 1% and 5%. Typical inductance is less than .2 nH. TCR for this part is 200 ppm or better and it is RoHS compliant.