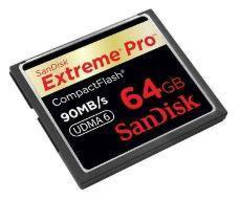 SanDisk develops its flash controllers and memory chips together, allowing the company to perfectly match and fine-tune the two technologies throughout the testing process, resulting in high-performance products with industry-leading endurance. The SanDisk Power Core Controller brings numerous benefits to the SanDisk Extreme Pro CompactFlash cards, including: