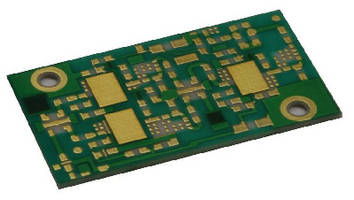 Remtec’s AgENIG substrates are suitable for various assembly types including SMT soldering and die attach. The addition of a thin layer of Palladium plating (Universal Finish) also allows welding, gold wire bonding and eutectic die attach. In addition, products based on this metallization process can be used up to 170°C continuous operating temperature. Pattern definition can be held to .006” line and spaces. The major characteristics of Remtec’s PCTF technology – multilayers, integrated resistors, plugged via holes, and plated thru holes – are also available with the new, proprietary process.