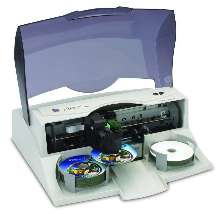 Instead of copying and labeling discs one at a time, Bravo II is designed for hands-free, automated production of up to 25 CDs or DVDs per job (50 discs with kiosk mode). An advanced robotic mechanism is used to transport discs into the built-in 52x CD-R recorder or optional Pioneer® combo DVD R/CD-R recorder. After recording, discs are transported to the integrated printer and printed in full color directly onto the surface of the disc.

The Bravo II Disc Publisher is a robust, professional version of Primera's Bravo Disc Publisher. It has many new features, including:

AccuDisc Technology
AccuDisc is a patent-pending suite of hardware and firmware enhancements that provides the most accurate and precise disc picking on the market. Utilizing advanced LED optics instead of mechanical components, AccuDisc eliminates misalignment of the picking mechanism. It also prevents the feeding of double discs into the recordable drive.

USB 2.0 Interface
Bravo II uses a single high-speed USB 2.0 cable for connecting to the user's PC or Mac computer. Previously, the Bravo Disc Publisher required two cables: a USB 1.1 cable for printing and robotic control and a FireWire(TM) cable for the data interface. USB 2.0, with a data transfer rate of 480Mb/s, is 20% faster than the FireWire interface.

Faster Throughput
Bravo II has increased its disc production rate by 10% over the Bravo Disc Publisher. This is accomplished with a faster picking mechanism, increased robotic speed and 15% faster printing speed.

"With Bravo II, our customers will enjoy incredible 4800 DPI print resolution, a self-configuring interface with USB 2.0 and the industry's best reliability with our exclusive, patent-pending AccuDisc Technology," said Mark D. Strobel, Primera Technology's Vice President of Sales and Marketing. "Bravo II is ideal for the duplication of video, software and music as well as mission-critical applications such as medical imaging, digital photo processing, kiosks and service bureaus. You can even connect a Bravo II to your office network for enterprise-wide disc publishing."

A business card adapter kit is available to copy and print 80mm mini-discs, rounded "hockey rink" mini-discs and business card shaped CDs. The Adapter Kit is priced at US$199 (MSRP).

Optional PTBurn Network Software allows up to 5 users to send CD or DVD recording and print jobs to a Bravo II remotely from client PCs. The software runs on virtually any server/client network under Windows 2000/XP and sells for just US$299.95. Additional 5-user license blocks are available for US$299.95 each. There is no limit on the number of users that are able to send jobs over the network.