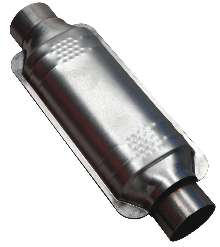 Intended for luxury cars, SUVs, and pickup trucks, QuietCat Converter incorporates baffled tube that cuts overall noise by 35% with no reduction in horsepower, torque, or catalytic efficiency. It is rated for engines up to 5.9 L/6,300 lb and comes in 2, 2.5, and 3 in. dia inlet and outlet sizes. Overall can length is 18 in. Available with and without single air tubes, converter meets emissions requirements, is OBD II compliant, and features proprietary catalytic chemistry.

Langhorne, PA... Eastern Manufacturing, a world-class manufacturer of catalytic converters and related components, has just launched a new catalytic converter designed for quieter operation. It is specifically intended for applications on full size luxury cars and SUVs (such as Cadillac, Lincoln, and Mercedes Benz), as well as pickup trucks. The new Eastern QuietCat Converter incorporates an innovative baffled tube, which helps cut overall noise by approximately 35% without losing horsepower, torque or catalytic efficiency. Made for universal application, the QuietCat is rated for engines up to 5.9L / 6,300 lbs. The converter comes in 2", 2.5", and 3" diameter inlet and outlet sizes. Overall can length is 18".

Eastern's new QuietCat is available with and without single air tubes. Versions with an O2 sensor port will also be available. The converter meets emissions and performance requirements and is configured for an easy, trouble-free installation. It is OBD II compliant in 49 states (CA excluded) and features Eastern's proprietary catalytic chemistry and high-flow design that maximizes engine output and catalytic efficiency.

Eastern has established a new 115,000 sq. ft. headquarters and manufacturing facility in Langhorne, PA. Combined with other company locations in the area, Eastern's overall physical plant now encompasses over 230,000 total square feet of space. The new Langhorne facility incorporates advance-manufacturing technology, including automated workstations and a high-speed production line. The facility also has its own tool and die department for developing new equipment and repairing or maintaining current production assets.

According to George Schafer, President, "Eastern has enjoyed exceptional growth over the past few years and this new facility will help us to be in an ideal position to successfully and efficiently manage that growth while meeting the individual needs of our ever expanding customer base. With these new facilities in place, we expect to increase our work force by over 40% and triple overall production output."

World-class quality and innovation has helped Eastern earn catalytic converter certifications in over 58 countries around the globe. Continual improvements in converter design, production, and product delivery systems have made Eastern the leading choice in both universal and direct-fit catalytic converters.
Share