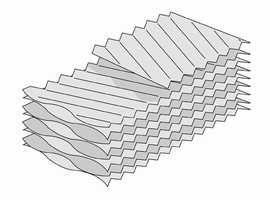 NEXT and VORTEX both give end-users two important category improvements, according to MIRATECH VP/Sales, Marketing and Engineering Bill Clary. "Because of their designs NEXT and VORTEX provide industrial engine operators greater catalyst element strength, durability and resistance to telescoping, as well as increased catalyst performance and efficiency. Both benefits come while still accommodating back pressure limits," says Clary.

Looked at under a microscope the surface of a catalyst substrate's coating is rough and uneven and looks something like the surface of a sponge. This microscopic sponge-like surface where the catalyst's precious metals (usually some combination of platinum, palladium and rhodium) reside is full of nooks, crannies, pockets and pores. It's a design that is anything but flat. To reach the precious metals embedded in this uneven surface, and thus achieve catalysis, good mixing of the engine exhaust with the catalyst precious metals is essential. "Good mixing comes from turbulent exhaust flow," Clary explains.

"Using two very different designs," according to Clary, "NEXT and VORTEX substrates increase catalyst performance and efficiency by maintaining a higher percentage of turbulent exhaust flow across the entire length of each catalyst substrate." Both NEXT and VORTEX produce what MIRATECH calls a high Turbulence Factor - the percent of turbulence across the length of the substrate - according to Clary.

NEXT substrate has creases or grooves in the foil to interrupt air flow and create more turbulent zones. Each groove in the NEXT substrate creates a following turbulent zone in the channel. Multiple grooves produce multiple turbulent zones which boosts catalyst performance because more mixing means more pollutants react with more precious metals. NEXT also has a lower backpressure than traditional substrates, says Clary. "NEXT uses 60 degree triangular channels that give a higher percentage of open substrate frontal area than traditional straight-line flow substrates," says Clary. "That means NEXT is optimized not only for maximum catalyst reactivity, but also for low back pressure," he adds.

VORTEX substrate, because it's rectangular, takes a different path to a high Turbulence Factor than NEXT, MIRATECH's round substrate. VORTEX achieves a high Turbulence Factor through superior static mixing and mass transfer. VORTEX is a corrugated foil substrate that is layered and stacked in an off-setting, overlapping, angle-channel pattern where each overlap point is electronically resistant welded. The angled overlapping channels, combined with the resistant weld-points design, create turbulent air-flow through the entire length of the VORTEX substrate.

Not only do both of the new MIRATECH substrates realize better turbulence for enhanced performance, but both substrates also offer a benefit many industrial engine end-users would say is even more important for catalytic converters - increased strength and durability. The very different designs of NEXT and VORTEX that produce better mixing also make each substrate stronger, more durable and less prone to nesting or telescoping than traditional straight-line flow substrates.

The grooves in NEXT that create multiple turbulent zones for better performance also increase substrate strength. The NEXT grooves interlock every layer of the catalyst substrate in a layer by layer pattern across the entire diameter and length of the substrate. This self locking system joins the flat and corrugated strips together and makes the entire matrix stronger and more stable.

Clary says NEXT and VORTEX substrates will be incorporated across MIRATECH and non-MIRATECH products and a stocking inventory will often allow same-day shipping of elements. NEXT elements will be used in MIRATECH's round product lines (MN, MBA, IQ elements and housings and RC and QC series converter/silencers). NEXT raw materials will be kept in stock as will a wide inventory of finished ready-to-ship elements. VORTEX elements' rectangular structure lets MIRATECH design catalyst elements of any size while providing off-the-shelf availability for many common sizes. In addition, VORTEX elements will be compatible with many non-MIRATECH housings (including GT Exhaust Systems, Johnson Matthey and Maxim Designs).
Share