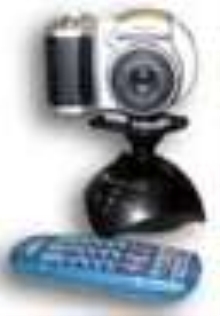 Controlled by hand-held, TV-style remote, IR-Pod features motorized base that pans and tilts camera. Set-up requires users to plug camera and power cord into unit and does not require computer. Able to work with any camcorder, camera, or webcam within weight restriction, product is available in 2 versions: TrackerPod-IR for cameras under 0.75 lb, and PowerPod-IR for cameras from 0.75-3 lb. Applications include video conferencing, security, and surveillance.

Wireless Position Control for any Camera

September 9, 2004. Camera and camcorder owners interested in videotaping themselves or experimenting with robotic camera movement will be interested in the new IR-Pod from Eagletron. A small motorized base that pans and tilts a camera, the IR-Pod is controlled by a hand-held remote control like the one you use for your TV.

Unlike Eagletron's previous products, there is no need for a computer. You mount your camera to the unit, plug in the power cord, and can start rotating the camera left, right, up, and down by pressing buttons on the remote control.

"It's something our customers have been asking for and we've delivered," says Eagletron CEO Gilbert Verghese.

The IR-Pod is extremely versatile. Companies can combine it with an ordinary camcorder to get boardroom quality video conferencing at a fraction of the cost. Security and surveillance professionals can pan and tilt surveillance cameras mounted in high and out-of-reach spots using the hand-held remote. Photo enthusiasts can take a remote series of shots (if their still-camera has a remote) all at different angles. Instructional video producers can use it to keep a camcorder pointed at themselves while they move around.

For complete information about the product, visit Eagletron's web site at www.trackercam.com/IR.

Eagletron Inc., established in 1998, is a hardware and software innovator in the areas of computer vision and robotics. Eagletron developed the first USB pan/tilt device for webcams, the TrackerPod, complete with TrackerCam Software for automatic human skin tone tracking and Internet remote control. Eagletron then developed the first USB pan/tilt device for camcorders, the PowerPod, along with DVdriver software for using camcorders as Pan/Tilt/Zoom webcams in popular applications like AOL Instant Messenger, Microsoft NetMeeting, Yahoo! Instant Messenger. In conjunction with Compex, Eagletron also developed the first wireless 802.11g pan/tilt webcams. Eagletron collaborates with ADS, Canon, IONetworks, and Logitech to provide a range of cameras and bundled with its innovative pan/tilt devices. Further information can be found at www.trackercam.com.
Share