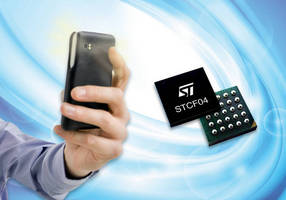 ST's new chip, the STCF04, is an integrated camera flash and torch controller that raises the maximum power of an LED flash module from a few Watts, typical of today's designs, to over 40 Watts, producing the brightness equivalent to an outdoor security floodlight. The new device also provides extra flash and torch brightness controls, with eight user-selectable levels for the flash and 12 for the torch, as well as a light-sensor input. Flash and torch safety timers, temperature sensing and short-circuit protection features are also built in.

The STCF04 is used in a unique configuration combining a supercapacitor, a discrete high-current MOSFET switch and high-power white LEDs, and is ideal for use in emergency high-intensity flashing lights as well as camera and cameraphone applications.

The discrete MOSFET is the key to the STCF04's power advantage over other controllers that usually integrate a MOSFET of lower rating on the chip. Its extra power enables designers to provide the higher quantities of light energy required by today's high-Mpixel camera sensors by specifying an LED flash unit rather than a conventional high-power xenon flash, thereby gaining the advantage of a compact and simplified design.

Since ST began sampling the STCF04, two major partners - Murata which is leading producer of supercapacitors (MURATA) and OSRAM which is a top-tier supplier of flash modules for leading smartphone platforms have begun using the device to showcase the best capabilities of their latest products.

Available in the 25-bump 3 x 3mm TFBGA package, the STCF04 is currently sampling. Full production is planned at the end of Q1 2012 priced at $2.00 for orders of 1000 pieces. Alternative pricing options may be available for higher quantities.

STMicroelectronics is a global leader serving customers across the spectrum of electronics applications with innovative semiconductor solutions. ST aims to be the undisputed leader in multimedia convergence and power applications leveraging its vast array of technologies, design expertise and combination of intellectual property portfolio, strategic partnerships and manufacturing strength. In 2011, the Company's net revenues were $9.73 billion. Further information on ST can be found at www.st.com.

Increasing the pixel density of the image sensor enables sharper, better quality images, particularly when transferred to a large screen such as a plasma or LCD TV. On the other hand, each individual pixel in the sensor is smaller and so absorbs less light energy in a given exposure time.

Although not usually a problem in normal daylight, since the sun easily provides enough energy for each pixel, smaller pixel sizes challenge photography in low-light conditions and demand a high-power flash to ensure adequate exposure. While it is true that typical pixel sensitivity is increasing with each generation of sensors, the improvements do not compensate fully for the reduction in surface area.

Miniaturized xenon flash units, which use the same technology as in a traditional camera flash, produce a short burst of high-power illumination which is more than adequate for most digital photography. However, the xenon flash can be inconvenient in a small form-factor product such as a phone or compact DSC. High-voltage circuitry such as a charging supply of over 300V and a trigger operating at several kilovolts are needed, and must be separated from other components for safety. Also, the high-voltage capacitors used in these circuits tend to be large and bulky.

Flash modules featuring high-power white LEDs have emerged as an alternative. These offer the advantage of much simpler control circuitry, as well as lower operating voltages that are intrinsically safer and call for less bulky components. Although less powerful than a xenon flash in peak intensity, an LED flash operates over a longer duration so that the light energy emitted throughout the exposure time is adequate for each pixel to detect the image.

However, since today's high-Megapixel camera sensors demand even more light to energize the pixels, small form-factor cameras need higher power LED flash modules. Today's most powerful units feature a supercapacitor to provide the fast supply of energy needed to light the flash, which a small battery such as a cameraphone battery is unable to provide. A supercapacitor has high energy-storage capability in a small volume, and has very low Equivalent Series Resistance (ESR); a parasitic effect that limits the discharge rate of a conventional capacitor. The battery charges the supercapacitor over a relatively long period of about a second. When fully charged the supercapacitor discharges its energy rapidly into the LED circuit, which produces a powerful pulse of light whose duration can be controlled using external circuitry. Then the supercapacitor can be recharged from the battery, to be ready for the next flash.

A controller IC coordinates charging the supercapacitor and triggering the discharge into the LED circuit. This IC usually also controls functions such as adjustment of flash brightness or duration, and the use of the LED in torch mode. The torch, or flashlight, function is often implemented as a value-added feature of the end product. This combination of a supercapacitor, one or more white power LEDs, and the controller IC is a more than satisfactory alternative to the xenon flash in compact DSCs and built-in cameras that eliminates the safety issues of the xenon flash.

As camera Megapixel count continues to increase, and as consumers expect better and better performance from built-in cameras, producers of flash modules need enhanced driver ICs capable of delivering ever greater quantities of light energy. Product designers also appreciate extra features such as more sophisticated torch-mode controls in order to offer improved user experiences with each successive product generation. A limitation of most controller ICs, however, is that the power MOSFET needed to control the transfer of energy into and out of the supercapacitor is usually integrated in the device and has limited current-handling capability. This allows only a few Watts to be driven into the flash.

ST's STCF04 enables much higher power - in fact over 40W, as described earlier - to be supplied to the LEDs and also supports extra controls and user features, thereby overcoming the two critical demands placed on designers of flash modules and cameras to provide extra power and functionality. ST has achieved this by designing the device for use with an external MOSFET of much higher power rating than can be achieved using an integrated device.

Moving the power switch off-chip has also allowed ST to implement extra functionality in the STCF04. It is the most feature-rich flash/torch controller on the market today, supporting eight user-selectable flash power levels, 12 torch power levels, control of four or more individual power LEDs and an input for a light sensor to control the flash duration, in addition to typical protection and safety features.

A complete flash module built using the STCF04 occupies around 60mm2 of pc-board space. Although larger than other LED modules of lower power, the result remains significantly smaller and simpler than a xenon circuit while satisfying the demand for very high-energy flash illumination.

Since ST began sampling the STCF04, two major partners - one a supercapacitor producer and the other a supplier of flash modules for leading smartphone platforms - have begun using the device to showcase the best capabilities of their latest products.