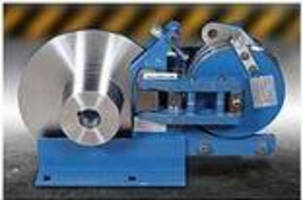 If the installation conforms to AIST's dimensional standard for DC mill motors, then when ordering all that is required is the DC mill motor number and existing electrical coil specifications. In all other installations, please provide a drawing of the existing brake drum.

The CDB1014A caliper disc brake provides higher performance and easier maintenance than the drum brakes it replaces. Upgrading your crane with PT Tech's CDB1014A will result in the following advantages.

5) A set of friction pucks weighs only 4½ pounds.

6) Eliminates drag and slip problems due to drum thermal expansion.

PT Tech supports its commitment to excellent field service with a large inventory of parts and a 24-hour emergency service.