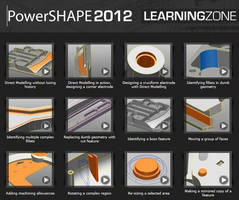 PowerSHAPE 2012 delivers direct modeling options focused on design for manufacture, particularly preparing product designs for development of molds and other types of tooling. Enhancing existing commands, direct modeling functionality lets designers tackle such problems in product designs as insufficient draft or inappropriate fillet size. Also, machining allowances can be added before manufacturing, and design thickness can be modified by specific value or interactively.


Delcam has added a range of direct modelling options to the 2012 release of its PowerSHAPE CAD software. Unlike other programs that have incorporated direct modelling as part of a product design system, the PowerSHAPE options are focussed on design for manufacture, in particular on preparing product designs for the development of moulds and other types of tooling. Full details, including video demonstrations of the new functionality plus the ability to download an evaluation version, are on the PowerSHAPE 2012 Learning Zone - http://www.delcam.tv/ps2012/lz.

"The direct modelling functionality that we have added will enable tooling designers to tackle all the common problems that they find in product designs, such as insufficient draft or inappropriate fillet sizes," claimed PowerSHAPE Development Manager, Ian Watkins. "It is faster to use direct modelling than surface modelling and so can shorten the overall time needed to produce the tools. In addition, we have made the new options as accessible as possible by enhancing existing commands rather than grouping them in a separate area of the software."

"Together with the extensive data translation and data repair options already available in PowerSHAPE, the addition of direct modelling gives a unique range of capabilities to tooling designers, whether they are working with moulds, press tools or die-casting equipment."

Many product designers still produce designs with insufficient draft, making it impossible to remove the as-designed part from its tooling, so the ability to add draft to solid models is expected to be one of the most popular options. This can be done either by using a specific value or by modifying the model interactively. The change can be applied to a single surface or to a group of surfaces, such as the sides of a pocket. In the latter case, the software is intelligent enough to maintain the radii of any fillets linking the sides.

Another common problem for the toolmaker is the use of impractical fillet sizes by designers. Small fillets require extra machining time so they extend delivery times and increase costs. In addition, they can restrict the flow of material in moulds or dies, so increasing processing times and pressures.

PowerSHAPE can use direct modelling to identify fillets within imported geometry, even when the modelling history has been lost. They can then be replaced with new fillets having more suitable radii.

Material flow problems can also occur when the thickness of items like reinforcing ribs is not sufficiently high. Again, PowerSHAPE can be used to modify the design, either by a specific value or interactively.

The same thickness modification option can be used to add machining allowances before manufacturing, for example when adding material to the split surfaces of a mould or when offsetting surfaces to create electrode designs from tooling designs.

Other features that can be identified within "dumb" geometry include holes, pockets, cuts and bosses. Intelligent manufacturing information can be added to the features and passed to Delcam's PowerMILL CAM system. For example, information on the sizes and types of holes can be used for automated generation of drilling programs. These features can be suppressed within the model so that, for example, holes in a surface can be ignored by the machining program until they need to be drilled.