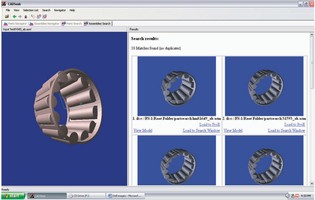 (Ames, IA USA) - Ask design engineers what they think about searching for CAD parts data when designing a new product. Or ask manufacturing employers what they think of parts redundancies in their CAD files. Your questions are as likely to be met with groans as with definitive answers. Then ask about geometric search technology and you'll likely find a puzzled look and little or no awareness that 3D search technology exists at all - until now.

iSEEK Corporation has entered the marketplace with a unique, powerful and proven shape-based search technology. Called CADSEEK(TM), it seamlessly integrates with an organization's CAD software to perform fast and accurate, geometric-based parts and assembly searches. A CADSEEK user can even navigate through an enterprise-wide CAD database by zooming in and "flying over" the entirety of files represented as a virtualreality-like universe of spheres on one computer screen.

According to Curt Carlson, iSEEK's Executive Vice President of Business Development, "CADSEEK's accuracy is one factor which led to the signing of a major contract with Deere & Company for the product in June. John Deere conducted extensive testing on 3D search products for over a year. They considered several alternatives but chose our product. CADSEEK's accuracy, speed and scalability provide real value in organizing an incredibly large CAD database and making it easy to search."

CADSEEK uses 3D part geometry as the basis for the search, rather than text based descriptions or volume (voxel) technology used by other companies. Dr. Qamhiyah adds, "Shape coding is always accurate where the voxel approach has precision limitations. Another difference is the linear (or unlimited) scalability of CADSEEK and that it works regardless of the orientation of the part being searched. And at present, CADSEEK is the only product that can search complex assemblies accurately."

iSEEK co-founder and Senior Vice President and COO Dr. Don Flugrad comments, "CADSEEK software is truly simple to comprehend and use. Its straightforward design gives users confidence in their ability to operate after a very short demonstration. Once you see it, you get it in just a few minutes."

There are four ways to use CADSEEK. The first is to simply load an existing image of the target part, or one that's similar. Second is to enter all or a portion of a part name or number. Third is to use a CAD program to sketch a target part. Fourth is to use the Visual Navigator to view (fly over) the database, picking a CAD file from spherical shapes which represent families or clusters of like parts.

CADSEEK can be used to identify and consolidate existing redundant parts. It can help eliminate potentially new redundant parts as new products are designed. As a supply chain management tool, it can serve as a matchmaker between OEMs and contract manufacturers or vendors supplying parts to OEMs. Companies interested in standardizing parts or ballparking parts pricing have quicker, more efficient access to like cases or scenarios. Similarly, engineers can gain quicker insights to design challenges by examining similar parts more quickly - perhaps even modifying existing CAD files rather than creating new designs from scratch.

Nearly 15 years of research in geometric reasoning and in CAD search technology mark the career of iSEEK co-founder Dr. Abir Qamhiyah. She became President and CEO of iSEEK when it was established in 2004. She was joined by Dr. Don Flugrad with whom she has collaborated on numerous teaching, research and engineering projects. Dr. Flugrad serves as Senior Vice President and COO of iSEEK. Together they've worked on developing and refining a fast, efficient and accurate shapebased search technology for CAD databases. The resulting product, CADSEEK, employs algorithms which capture the geometric shapes of objects. Patents are pending for CADSEEK search technology.

The company is located in Ames, Iowa in the Iowa State University Research Park.