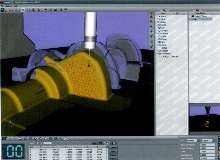 New standards-based independent CAD-CMM software conforms to all of the existing and emerging international CMM standards and specification.

Software for any appication is always being enhanced and improved. That holds true for coordinate measuring machine software as well. That's why a new company, Xspect Solutions, Inc., headquartered in Wixom, Michigan, is introducing OpenDMIS(TM), the metrology industry's newest and most complete open architecture metrology software that is based on proven standards (DMIS, STEP, I++).

Keith Mills, recognized metrology industry executive and entrepreneur, is the founder and president of Xspect Solutions, Inc. Mills says, "CMM programming has remained expert labor intensive and prone to error despite all the software advancements of past years, while the utilization of CAD data has made more complex the programming task. The industry was ready for improved and simplified open architecture metrology software, preferably from a non-CMM machine builder, who is free from the obligations and encumbrances that are typical with machine builder equipped software."

Mills adds, "OpenDMIS(TM) pioneers object-based programming. It is truly an intellectual product that takes the guesswork out of CMM programming by seamlessly integrating CAD data with the CMM programming and measurement process, providing the user with a high level of power, precision and productivity at the single click of the mouse. Drag and dropping features from the database area into the adjacent programming window automatically generates the underlying DMIS 4.0 code together with probe and alignment definitions. Complex CMM programs can be created in a few minutes and simulated, utilizing the powerful simulation and collision avoidance tools standard in OpenDMIS.(TM)"

Mills also emphasizes, "There are no pop-up windows in OpenDMIS(TM). The product incorporates the use of dynamic sensitive tool bars, action icons and context sensitive work areas. The graphics view port remains freely visible at all times, Fig. 1,
maximizing operating efficiency. There are no windows to close and no cascading windows, and typical screen crowding is eliminated. Also, there is no annoying drill-down functionality."

An overview of the new OpenDMIS(TM) functionality includes:

OpenDMIS(TM) is available on new CMM machines, Xspect pre-owned Xperienced CMMs or as an upgrade to existing installed manual and DCC CMMs.