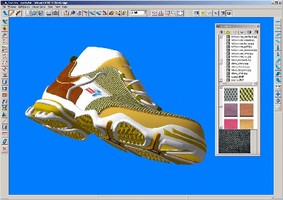 
Delcam Crispin will expand is range of design and manufacturing software for the footwear industry with the launch of a number of new and enhanced products at the SIMAC exhibition to be held in Milan, Italy, from 28th to 30th October. Delcam Crispin is already the world's largest supplier of CADCAM software to the footwear industry - it is the only company able to provide a complete solution for the design and manufacture of both uppers and soles. With its new releases, the company expects to increase its dominance of the sector.

The major new product at SIMAC will be TechPac - a new 2D product to generate technical packages for footwear designers to supply to their manufacturing partners. TechPac allows designers to specify the manufacturing processes to be used and the sequences of operations to be followed at all stages of the production of the shoe. It will help ensure that the design is produced exactly as specified and to the required delivery schedule.

The system is supplied with pre-defined templates to specify the path for the flow of manufacturing data during production. These templates can be modified by the user to cover any specific requirements of the design and manufacturing companies, or of the particular project. 2D part geometry, models and images can be imported into the documentation from the range of Delcam Crispin design software.

TechPac incorporates basic 2D engineering functionality from Delcam Crispin Engineer, plus comprehensive text functionality, with formatting options including font, colour and scale, so that manufacturing companies can mark up the documents with any comments or queries on the suggested processes. For example, reference lines can be added onto the parts for operations like stitching, skiving and folding, together with images and text on the type of machine to be used.

All of the documents can be provided as pdf or HTML reports so making it easy for everyone involved in the project to exchange data electronically.

The most important of the new updates is the latest release of the 3D upper design module, ShoeDesign. ShoeDesign provides a comprehensive range of options to develop new designs, either based on an existing last or when creating a completely novel product. The software comes with a wide range of materials, textures and colours, while features like stitching, padding, eyelets and laces, can all be included to complete the design.

The main focus of the new version has been on improving the ease of use, so making the software simpler for new users to learn and faster for experienced operators to use. The interface has been revised so reducing the number of icons on the screen at any one time. In addition, the cursor action has been improved to speed up drawing of style lines and selection of menus and icons.

Handling of textures has also been improved. It has been made easier to edit existing textures, and to drag and drop textures from a texture library onto the various panels of the upper.

The new version of the LastMaker software for last design has also been made easier to use, both for the creation of standard lasts and for the development of bespoke designs. Improved creation and editing tools for cross sections have been added to allow more specific adjustment to the overall design. Similarly, profile line editing has been enhanced to make it easier to modify the outline shape of the last. Templates are available for the toe, back-curve and bottom sections of the last, so that these sections can be incorporated into the design more quickly and easily.

Functionality has been added for comparing scanned foot data with an existing digital last, to help produce a custom-made pair of lasts. Control planes, based on standard foot measurements, have been included, making it simpler to adjust standard last shapes for a bespoke design.

Developments have also been made to the base 2D Engineer package. The main new functionality allows Edge Templates to be appended to a part boundary, allowing dependant margins, makers, stabs and notches to be added after the boundary has been created. In addition, work has continued on many areas of 2D Engineer to make the software faster and easier to use.