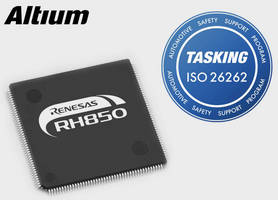 Intended for automotive application development, TASKING VX-toolset for RH850 supports all RH850 automotive MCUs from Renesas Electronics. Compiler incorporates support for MISRA C:2012 guidelines for C programming as well as MISRA C:1998 and C:2004 guidelines. Eclipse-based IDE with integrated compiler and debugger is provided along with other features, such as integrated code analyzers, profiling through code instrumentation and run-time error checking capabilities, and configurable linker.

The TASKING VX-toolset for RH850 is the first compiler to incorporate support for the latest MISRA C:2012 guidelines for C programming, in addition to the MISRA C:1998 and C:2004 guidelines. TASKING’s MISRA C support enables developers to easily select the MISRA rules to enforce and configure the MISRA guidelines in accordance with the company’s prescribed rules in order to increase code safety, reliability and maintainability. By providing support for MISRA C:2012, developers now can benefit from the latest guideline improvements that can reduce the cost and complexity of compliance, whilst aiding consistent, safe use of C in critical systems.

”With the RH850 architecture Renesas has built a microcontroller family that has gained a lot of recognition amongst our automotive customers, resulting in a strong interest for TASKING’s robust and efficient VX compiler technology to support the RH850 series”, says Harm-Andre Verhoef, TASKING Product Manager at Altium. “Thanks to close cooperation with Renesas in the development of the new VX-toolset, as well as our ability to develop a compiler that works independently from compilers for other architectures, we have been able to create a stable and highly optimized compiler for the RH850 in a very short time.”

Key features of the TASKING VX-toolset for RH850 include:

• Eclipse based IDE with integrated compiler and debugger

TASKING’s ISO 26262 Support Program is available for the new RH850 toolset release, offering various cost and lead-time efficient solutions to help customers achieve certification for functional safety standards such as ISO 26262 and others. The manufacturer of an electronic (sub)system is responsible for obtaining certification credit. As part of this process the manufacturer has to assess the required level of confidence in the utilized software tools such as the TASKING RH850 toolset, enabled by Altium through a Compiler Qualification Kit as well as optional ISO 26262 Compiler Qualification Services.

The VX-toolset for RH850 release v2.1 is available now on PC/Windows, with other platforms supported on request. Pricing starts at USD 4,695 / Euros 3,495 for the TASKING VX-toolset Standard Edition. The Professional Edition with hardware debug support using the Renesas E1 emulator will be available in fall 2014.

TASKING is an Altium brand. TASKING development tools are used by carmakers and the world's largest automotive Tier-1 suppliers to program microcontroller based power train, body control and safety related applications around the globe. More than ten thousand users rely on the TASKING compilers and debuggers to create richer next-generation applications while achieving optimum reliability, security, and performance. TASKING compilers are also part of Altium Designer and installed on hundreds thousands of developer’s desktops around the globe. In 2012 the TASKING brand celebrated its 35-years anniversary of technology leadership, quality tools and customer support excellence.

Altium Designer, a unified electronics design environment links all aspects of smart systems design in a single application that is priced as affordable as possible.

With this unique range of technologies Altium enables electronics designers to innovate, harness the latest devices and technologies, manage their projects across broad design ‘ecosystems’, and create connected, intelligent products.

Founded in 1985, Altium has offices worldwide, with US locations in San Diego and Boston, European locations in Karlsruhe, Amersfoort, Kiev, Moscow and Zug and AsiaPacific locations in Shanghai, Tokyo and Sydney. For more information, visit www.altium.com or www.tasking.com. You can also follow and engage with Altium via Facebook, Twitter and YouTube.
Share