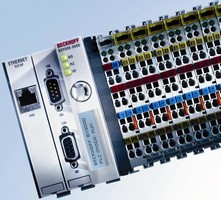 MINNEAPOLIS, May 3, 2006 - With the introduction of the new BX9000 Bus Terminal Controller, the range of Ethernet TCP/IP controllers from Beckhoff Automation has become even more scalable. Costing just around $500 (U.S.), the BX9000 delivers integrated PLC functionality at an exceptional price.

In terms of design and performance, the BX9000 is positioned between the Beckhoff BC series of Bus Terminal Controllers and the CX series of Embedded PCs. Like all DIN rail mounted controllers from Beckhoff, the BX9000 features a direct connection to the entire Bus Terminal I/O system of over 180 terminal designs.

BX series controllers feature an illuminated display with 2 lines of 16 characters each and a joystick switch for user interaction or diagnostic information. The PLC project in the BX9000 can write to the display and read inputs from the joystick. With a 256 kbyte program memory and a 256 kbyte data memory, the BX9000 provides increased memory capacity and additional interfaces when compared with the BC series of Beckhoff controllers.

The BX9000 also interfaces with the following Ethernet protocols: ModbusTCP, ADS/TCP and ADS/UDP, as well as BootP, DHCP, SNTP and SMTP. With an integrated real-time clock, the BX9000 can be used in decentralized applications for which the time or the day of the week play an important role.

Additionally, two serial interfaces (1 x RS232 and 1 x RS232/RS485) are integrated for programming and for connecting additional serial devices. Further peripheral devices, such as displays, modems or drives can be connected via the integrated Smart System Bus (SSB), which is a CANopen-based master device. As with all other Beckhoff controllers, TwinCAT automation software is used for parameterization and programming according to the globally-recognized IEC 61131-3 standard.