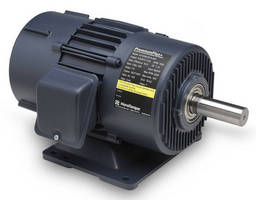 
By using low-cost ferrite magnets in an innovative flux-focusing design, NovaTorque motors deliver the "best of both worlds" - the superior efficiency of rare-earth permanent magnet motors at a price that is competitive with induction motors.

"In addition to having higher efficiency at the rated point, NovaTorque's PremiumPlus+(TM) motors maintain their high efficiency over a much wider speed and load range. For example, in a variable speed, variable torque application such as a fan or pump, a 50 percent reduction in speed results in a 75.0 percent reduction in load. At that reduced load, NovaTorque motors will maintain efficiency of approximately 91 percent, whereas a NEMA Premium efficiency induction motor will have declined to 80 percent. The advantage is even more dramatic when compared to the current installed base of induction motors, where improvements ranging from 20 percent or more are achievable," continues Johnson.

"The cost of rare earth (neodymium) magnet material, the basis of most conventional permanent magnet motors, has risen dramatically and is now more than 25 times the cost of ferrite. Further, supply of rare earth magnets, nearly sole-sourced out of China, is increasingly uncertain. The ability to use ferrite magnets allows NovaTorque to price its motors comparable to induction motors. This means OEMs and HVAC systems builders can now economically deliver permanent magnet motor efficiency with their systems" explains Johnson.

ABOUT NOVATORQUE, INC.
Based in Sunnyvale, CA, NovaTorque is a producer of brushless permanent magnet electric motors. The Company is dedicated to delivering the superior energy efficiency of permanent magnet motors at price points more comparable to the common AC induction motor. NovaTorque accomplishes this through an innovative, flux-focusing, design that allows for the use of ferrite rather than rare-earth magnets.