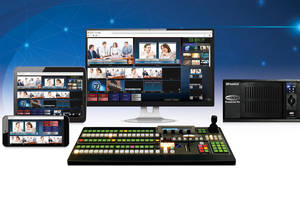 Broadcast Pix™ today announced its new BPswitch™ family of integrated video production switchers, which feature the industry’s first control-over-IP from anywhere by tablets, phones, and panels. Now, a corporate, government, school, or religious live broadcast can be controlled from a control room, the audience, another city, or even from home. Plus, broadcasters can control a remote unmanned studio affordably. The new switchers have enhanced BPNet™, hybrid SDI and IP I/O, streaming, NewBlueNTX graphics, optional robotic camera control, and are 4K upgradeable. The company will demonstrate its new switchers at the 2017 NAB Show (Booth SL9721) on April 24-27 in Las Vegas, Nev.

BPswitch enables control from tablets, phones and laptops by using the Broadcast Pix Commander™ user interface, which now can run in a browser, including Chrome, Firefox, and Opera. It can control a local BPswitch or a remote BPswitch over IP using BPNet. Commander lets non-technical personnel easily execute powerful live productions, including switching, adding titles, clips and effects, and controlling robotic cameras. The interface can be customized for any application.

Broadcast Pix also announced that its BPview™ multi-view can now be used in a browser. Since Broadcast Pix control panels are already network capable, putting BPview in a browser enables panels to easily control either local of remote BPswitch systems over IP.

Remote control is a rapidly growing market because of the staffing and location flexibility it brings. However, other switchers require leasing a big network line for each remote camera to bring it back uncompressed to a local switcher, which is prohibitively expensive. In contrast, BPswitch enables the switcher to be located with the cameras and controlled remotely over IP using a typical internet connection, making remote control affordable. BPswitch can also control remote IP cameras, such as Sony and Panasonic robotic cameras.

“BPswitch allows our customers to create great live video from anywhere on any device,” explained Kevin Prince, CEO of Broadcast Pix. “We’ve effectively leap-frogged the industry by combining our patented networkable switcher technology with the cloud technology from our ioGates acquisition. I think it’s fair to call this disruptive technology, because it fundamentally changes our industry’s concept of a control room by distributing it.”

The new BPswitch models are the FX, MX, and GX, which provide up to 22 SDI inputs and 12 outputs. All systems also provide IP inputs and streaming to Facebook Live and other CDNs, and are upgradeable to 4K. The built-in NewBlueNTX (NewBlue Titling Xperience) provides a motion graphics CG. Like previous Broadcast Pix switchers, BPswitch has up to eight internal channels for clips and graphics, customizable multi-view, file-based macros, ClearKey chromakey, Virtual Studios, and a range of optional control panels.

BPswitch models will ship in September starting at $11,990, a small price increase over today’s switchers. Existing Broadcast Pix switchers can upgrade to BPswitch. The company also announced a “BPswitch Quick Start” promotion, during which buyers of new Granite and Mica switchers with a panel can pay the BPswitch price increase and receive a free Commander interface and customization toolkit, as well as a no-charge upgrade to BPswitch.

Founded in 2002, Broadcast Pix provides integrated live video production switchers with the best control. From compact mobile units to large-scale solutions, every Broadcast Pix features patented control and automation technology that make it easy to optimize and customize your workflows. With customers in more than 100 countries, Broadcast Pix is the leader in totally integrated production switchers for broadcast, streaming, live event, and visual radio applications. Its BPNet ioGates media management products are used by leading broadcasters and production houses. Learn more at www.broadcastpix.com.