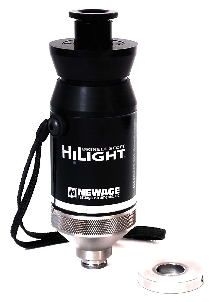 HiLight Series Scopes have built-in LEDs, which are fixed to shine downward at higher angle than standard scopes, providing even and consistent definition of impression's edge. Scopes offer 20X magnification and are completely enclosed so no ambient light reaches test impression. Model 5620-05 has half-tenth of mm graduations on reticle, and Model 5620-01 has adjustable filar in .01 mm graduations in addition to reticle.

Southampton, PA - Newage Testing Instruments, Inc. is introducing a new line of Brinell scopes called the HiLight Series which are designed to improve Brinell measurements. The HiLight Brinell Scopes use built-in high-efficiency LEDs (light-emitting diodes) to illuminate the Brinell impressions. The LEDs are fixed to shine downward at a much higher angle than standard
Brinell scopes to provide even and consistent definition of the Brinell impression's edge.

Traditional Brinell scopes use a flashlight attachment which shines through an opening in the side of the scope at lower angles ranging from nearly parallel to 45 degrees. The operator
often moves the angle of the illumination up and down to "pick" a view of the impression to measure and introduces more variation into the measurement process. The HiLight Brinell
Scopes are completely enclosed so no ambient light reaches the test impression - the lighting all comes from the built-in LEDs. Combining this optimized surface illumination with the crisp
20X magnification and sharp reticle insures more reliable results.

Another benefit of the HiLight scopes is the greater efficiency of the LEDs which allows up to 150 hours of continuous operation without replacing batteries. The HiLight scope can be used with
the removable wide foot to enable it to stand vertically by itself, or removed for use in tight positions.

Two models of the HiLight Scopes are available, the 5620-05 with half-tenth of a millimeter graduations on the reticle and the 5620-01 with an adjustable filar in .01 mm graduations in addition to the reticle.