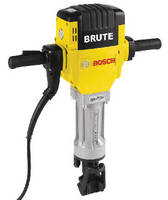 Mount Prospect, Ill., - Bosch's new Brute Breaker Hammer BH2760VC has surpassed its predecessor, the venerable 11304 Brute, achieving the best overall performance with the lowest vibration levels. The new Brute's hammer mechanism provides up to 60 percent more impact energy than the 11304, while reducing vibration levels by up to 50 percent. Weighing in at a svelte 65 lbs., the BH2760VC boasts the category's best power-to-weight ratio, delivering up to 68 ft. lbs. of impact energy.

The secret to Bosch's latest "crushing" innovation lies in the ability to improve the Brute's performance and lower vibration levels at the same time. Over the years, competitive products have used counter balance technology to reduce vibration levels, which adds size and weight to the tool. Using its patented Active Vibration Control(TM) technology, Bosch has created a longer air cushion which is actually built-in to the hammer mechanism and substantially reduces vibration levels at the source. This, combined with ergonomically-designed shock absorbing handles, helps provide the lowest vibration levels in its class for maximum user comfort in all day applications.

The increased impact energy not only improves performance but does not have an off-setting effect on jobsite durability. The BH2760VC was engineered from the bottom up to deliver a more efficient motor, less energy loss in the seals, heavier duty springs and bolts and a larger, more rugged spring dampening system. Bosch's Service Minder(TM) Brush System shuts the tool off when brush replacement, lubrication or preventative maintenance is needed and a grease-packed gear box and hammer mechanism eliminate the uncertainty of jobsite lubrication. All of these enhancements were made with one goal in mind: exceed today's already high standard for the Brute's durability and lifetime.

The Brute legend dates back to 1966 when the first production of the high-frequency GSH 27 (model 12308) was built in Leinfelden, Germany. In 1977, the universal motor was introduced in the Bosch 11304 Brute Breaker hammer. To date, a 1978 model of the 11304 remains one of the longest-rented tool in history - a total of 2076 times over 21 years - before it was donated back to Bosch still-operational.

The Brute BH2760VC comes complete with a non-slip rubber cover to prevent the Brute from tipping while in storage, a Deluxe Cart and four chisels. It will be available through authorized retailers nationwide this fall. To find out more or to locate a dealer, users may visit www.boschtools.com or call 877-BOSCH-99.

The Bosch Group is a leading global supplier of technology and services. In the areas of automotive and industrial technology, consumer goods, and building technology, some 275,000 associates generated sales of $53 billion (38.2 billion euros) in fiscal 2009. The Bosch Group comprises Robert Bosch GmbH and its more than 300 subsidiaries and regional companies in over 60 countries. If its sales and service partners are included, then Bosch is repre¬sented in roughly 150 countries. This worldwide development, manufacturing, and sales network is the foundation for growth. Each year, Bosch spends more than $5 billion (3.5 billion euros) for research and development, and applies for some 3,800 patents worldwide. With all its products and services, Bosch enhances the quality of life by providing solutions which are both innovative and beneficial.

About Bosch in North America

In the U.S., Canada and Mexico, the Bosch Group manufactures and markets automotive original equipment and aftermarket products, industrial drives and control technology, power tools, security and communication systems, packaging technology, thermotechnology, household appliances, solar energy and healthcare products. Having established a regional presence in 1906, Bosch employs over 20,000 associates in more than 70 locations, with reported sales of $7.3 billion in fiscal 2009.

Robert Bosch Tool Corporation in North America, was formed in January 2003 when Robert Bosch GmbH combined its North American power tool, accessory and lawn and garden divisions into one organization. As a manufacturing pioneer with more than a century's worth of experience, the Bosch name has become synonymous with engineering excellence. The Robert Bosch Tool Corporation is a world leader in the design, manufacture and sale of power tools, rotary and oscillating tools, accessories, laser and optical leveling and range finding tools, and garden and watering equipment.

For more information about the Bosch Group, visit www.boschusa.com.
Share