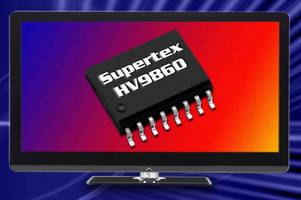 HV9860 also includes LED wiring fault detection, which protects an LED string from high current in cases of accidental short circuit from any tap in the string to ground. A wiring fault scenario is created, for example, during production when a wire connecting the LEDs gets shorted to the chassis, and, as a result, a very high current is delivered to the operating LEDs. The built-in protection provided by HV9860 identifies this scenario and shuts the IC down as well as signaling a fault to the rest of the circuit.

"Supertex's HV9860 gives users protection for their LED strings without the system complexity and additional cost of adding a high side current sensor externally," states Stephen Lin, Vice President of Marketing for Supertex. "Implementing the IC in LED backlighting and general lighting circuit designs simplifies the manufacturing process, such as in LCD TV monitors and light bulb production."