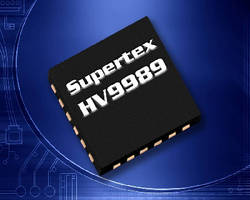 HV9989 drives boost or SEPIC converters in either continuous-conduction mode (CCM) or discontinuous-conduction mode (DCM). It features independent shortand open-circuit protection for each channel and three 1MHz transconductance amplifiers with tri-state outputs to close feedback loops and accurately control the LED current. It is powered by a built-in 40V linear regulator.

"HV9989 can operate with very high dimming frequency and deliver an over 10,000:1 dimming ratio because of its patented PWM dimming method," states Stephen Lin, Vice President of Marketing at Supertex. "The IC combines excellent line and load regulation in a multi-channel driver IC to reduce board space and system cost in LCD backlighting applications like flat screen TVs and monitors."