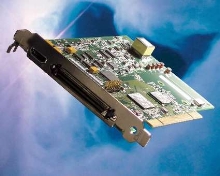 Overview
The new DaqBoard/3000 series are loaded with useful features that will set the new benchmark for low-cost multifunction PCI data acquisition. The heart of the DaqBoard/3000 is a custom data acquisition engine (daq3000) capable of making analog measurements at 1 µs/channel, and concurrently reading digital and counter inputs, while generating up to four 1-MHz/16-bit analog waveform outputs plus digital pattern generation. The benefit of IOtech's synchronous architecture is the user can scan analog inputs and have precise channel-to-channel time correlation without concern for the time required to perform the other I/O such as digital inputs, counter inputs, and analog outputs. In addition, neither the digital inputs, counter inputs, nor analog outputs reduce the bandwidth of the analog inputs, since the acquisition engine is capable of performing all of these tasks independently. In other words, the analog input bandwidth is independent of all other I/O concurrently and synchronously occurring on the board.

Analog Input
A 16-bit/1-MHz A/D converter can scan any sequence of input channels at 1 µs per channel. 7 ranges from ±100 mV full scale up to ±10V full scale can be selected on a per-channel basis. 8 differential or 16 single-ended channels are built-in, dynamically selectable on a per-channel basis as single-ended or differential. Unique to the DaqBoard/3000 series is the ability for the user to expand the built-in 8/16 analog input channels up to 32/64 channels using the low-cost PDQ30(TM) expansion module ($399). The PDQ30 can be added at any time by the user, and attaches via a cable to the DaqBoard's expansion port. When attached, all channels can be scanned in any order at 1 µs per channel. Additionally, the PDQ30 supports thermocouples attached to any analog input channel. Thermocouple measurements are made at a slower rate of approximately 10 kHz and employ over-sampling in order to provide ultra low-noise temperature readings.

Digital I/O
24 channels of digital I/O are included in the DaqBoard/3000 series. The 24 lines can be programmed as input or output in 8-bit ports. Inputs can be read concurrent with analog inputs at 1 µs per digital word, or asynchronously at anytime. If no analog inputs are enabled, digital I/O can occur as fast as 12 MHz.

Counter Inputs
Four 32-bit counters are provided by the DaqBoard/3000 series and are capable of measuring pulses up to 20 MHz. In addition, the counters can be configured to directly read quadrature-type encoders. Counter inputs can be read concurrently at the beginning of each analog input scan sequence, or asynchronously at anytime.

Low-Latency Control Outputs
Unique to the DaqBoard/3000 series is the ability for an output, digital or analog, to be updated based on any input - analog, digital, or counter. With other boards, outputs can only be updated after the input data is transferred to the PC and evaluated in PC software, which results in non-deterministic responses that are typically several milliseconds. With the DaqBoard/3000 series, the user can program set-points on up to 16 inputs, and then establish digital or analog outputs (discrete analog levels) where the output state is changed in response to an input. Depending on the number and type of inputs being measured, the latency can be as low as 2 µs from change of input to actual output generation.

Software Support
The DaqBoard/3000 series are supported by a strong suite of drivers for Visual Studio® and Visual Studio® .NET, plus support for LabVIEW®, MATLAB®, and DASYLab®. Also included with the DaqBoard/3000 is new DaqView 8.0, an Out-of-the-Box(TM) software application that provides effortless set-up, data collection, storage-to-disk, and real-time displays including new scope modes. DaqView sets a new benchmark for free software included with a PCI data acquisition board - this capability can add hundreds of dollars to the price of other suppliers boards. Two add-on packages are also available for DaqView users. DaqViewXL/Plus(TM) provides real-time import into Excel, analysis functions, plus enhanced real-time display. DaqView/Pro(TM) includes XL/Plus features plus real-time frequency-domain analysis capability.

Availability and Price
The DaqBoard/3000 series boards will be available August 29, 2005. Below is a selection chart describing each board and the associated price.

About IOtech
IOtech produces data acquisition hardware and software for use in PC-based test & measurement and industrial automation systems. Its products are used in research and manufacturing facilities and are sold throughout the world. IOtech, Inc. is located at 25971 Cannon Road, Cleveland, Ohio, 44146; telephone: (440) 439-4091; fax: (440) 439-4093; E-mail: sales@iotech.com; www.iotech.com.