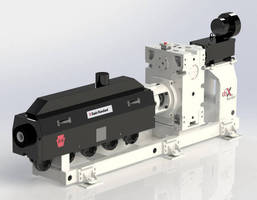 Offered with multiple extruder packages,Â dsX flex-film™Â comes in 1,900, 2,200, and 2,500 mm sizes and is equipped with extruders, feedscrews, gearboxes, air rings, and dies. Latter are manufactured for applications from 1–9 layers, and options for modifying equipment are based on application and processing factors.Â Targeting blown film applications, system supports processing efficiency.Â Line supports speeds up to 180 m/min and film thicknesses from 20–180 microns.

Options for modifying equipment are based on application, film thickness and other processing factors. The UpJet air ring is an option for increased output capacity. Surface winders can be upgraded to include center assist, gap winding, and reversible winding direction on a single winder with integrated nip, or back-to-back, or face-to-face winders with a secondary nip. Screw designs can be upgraded from X100 liner and Colmonoy 56 screw facings to more wear resistant X800 barrel liners and Colmonoy 83 screw flight facings.

The line supports speeds up to 180 meters per minute and film thicknesses ranging from 20 to 180 microns (0.8 to 7.0 mils). Advantages include die designs with among the the fastest formulation changes in the industry, options for multiple end-use applications, proven control systems and screw designs, flatter films with nip flattening enhancements, and U.S.-centered support and service for a faster response and shorter lead times. This line can be delivered and installed in as little as six months from order to acceptance.

Davis-Standard, LLC (www.davis-standard.com), headquartered in Pawcatuck, Conn., is a global leader in the design, development and distribution of extrusion and converting technology. Davis-Standard systems encompass over 10 product lines to support manufacturing applications and customers within every major industry. This includes the agriculture, automotive, construction, healthcare, energy, electronics, food and beverage packaging, and retail industries, among others. With more than 850 employees worldwide and a network of independent sales agents and suppliers in nearly every country, Davis-Standard is committed to engineering equipment that is cost effective, environmentally friendly, and offers a high return on investment. The company has manufacturing and technical facilities in the United States, as well as subsidiaries with facilities in China, Germany and the United Kingdom.
Share

Senvol ML™ to be Used for Missile Application with U.S. Army