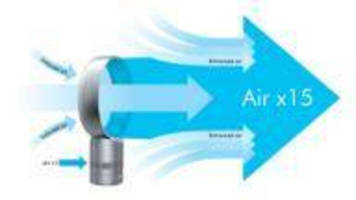 Say Goodbye to the Blade


James Dyson introduces the bladeless fan. No blades. No buffeting.

CHICAGO, Oct. 12 / / - James Dyson, who for the past 30 years has continuously revolutionized the vacuum cleaner industry, has turned his attention to addressing the everyday fan. As a result, he has designed the Dyson Air Multiplier(TM) fan, which has no blades. Instead, it uses a unique technology to multiply air 15 times, and through unprecedented advancements in airflow engineering, expels 119 gallons of smooth and uninterrupted air every second.

Until today, conventional electric fans have gone largely unchanged. The fundamental problem has remained the same for more than 125 years; the blades chop the air creating an uneven airflow and unpleasant buffeting.

"We realised that this inducement, or amplification, effect could be further enhanced by passing airflow over a ramp," says Dyson. "And of course this was the point where the idea of a bladeless fan became a real possibility. Here was a way to create turbulent-free air and finally do away with blades."

How it works: inducement and entrainment

Air is drawn into the base of the machine. The air is forced up into the loop amplifier and accelerated through the 1.3mm annular aperture, creating a jet of air that hugs the airfoil-shaped ramp. While exiting the loop amplifier, the jet pulls air from behind the fan into the airflow (inducement). At the same time, the surrounding air from the front and sides of the machine are forced into the air stream (entrainment), amplifying it 15 times. The result is a constant uninterrupted flow of cooling air.

The Dyson Air Multiplier fan is powered by an energy efficient brushless motor and air speed can be precisely adjusted with a dimmer switch. Conventional fans are wired to run at just two or three settings.

No blades mean no need for a grille and it's safe and simple to clean.

And because its motor is at its base, the Dyson Air Multiplier fan can be tilted with a touch, unlike a conventional top-heavy fan, which needs to be positioned with two hands and can topple easily.

Research, Design and Development is at the core of Dyson. One third of people at Dyson are engineers and scientists. Their expertise in fluid, mechanical, electrical, EMC, thermal, chemical, acoustic and software engineering allows them to design new products as well as challenge and improve existing technologies. Dyson has over 1,300 patents and patent applications for over 250 different inventions (2009). Dyson's RDD investment has quadrupled over the last 5 years. The total number of Dyson vacuum cleaners sold worldwide since 1993 is over 31 million (2009) - and still counting. More than half of these were sold in the last four years.