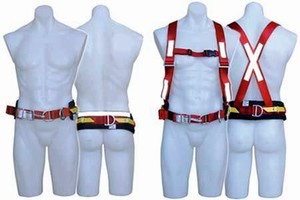 PROTECTA miners' belts consist of lightweight waist belt for support; detachable PVC-coated straps for secure attachment of vital tools such as battery packs and self rescuers; and reflective tape for visibility and safety underground. Belts are available as model AB001AU as well as AB002AU, which also features braces for extra support, allowing even distribution of weight from loaded belt over shoulders, back, chest, and hips.

09-05-07 PROTECTA, the world's leading manufacturer solely dedicated in providing the best in fundamental fall protection have announced the recent launch of their NEW Miners Belts. PROTECTA miners belts are an essential tool for underground miners, allowing them to attach necessary and vital equipment to safely perform their work. The miners belts have been constructed to be both functional and adaptable whilst maintaining a high level of comfort and mobility. Designed specifically for the mining industry, the miners belts provide a simple and functional piece of equipment to add to their tool kit to keep them safe. The two models in the range (AB001AU and AB002AU) consist of a lightweight comfort waist belt for support; detachable PVC coated straps for the secure attachment of vital tools such as battery packs and self rescuers; and reflective tape for added visibility and safety underground. The AB002AU model also features integral braces to provide extra support, allowing the even distribution of the weight from the loaded belt over the shoulders, back, chest and hips The miners belts are both versatile and practical and are also ideal for use in a variety of industries such as maintenance, oil production, line work, rigging and other applications requiring work positioning. They are best suited for activities where the user needs to be restrained from a leading edge, or where there is no possibility of a fall. For more information regarding PROTECTA's NEW Miners Belts visit www.capitalsafety.com.